Warning: strtotime(): It is not safe to rely on the system's timezone settings. You are *required* to use the date.timezone setting or the date_default_timezone_set() function. In case you used any of those methods and you are still getting this warning, you most likely misspelled the timezone identifier. We selected the timezone 'UTC' for now, but please set date.timezone to select your timezone. in /home/ewestodz/public_html/index.php on line 204
 Entertainment West Founder Message, The SoundTrack to My Life! | The Soundtrack to your Life
Tweet

The Soundtrack of your Life..

As a child born in 1960, the first music I ever heard was the soft, near angelic sound of my dear mothers voice, singing out loud to me, ”You are my sunshine, my only sunshine” my response apparently was a happy giggle, then my mom would pinch my nose and continue…”You make me happy when skies are grey….You are my sunshine….” 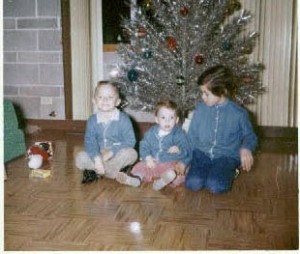 Little did I know then, that in a miraculous way, this was like God setting the needle down at the first song and the beginning of the record that would become the sweet and heartwarming Soundtrack to my life. As I was growing up, I would be exposed to nasal sounding country songs, from Mom and Dad’s little screechy radio speaker in the kitchen. Old greats like George Jones and Elvis groaning out beautiful gospel ballads and Dad’s favorite, the incomparable voice of Patsy Cline singing “Crazy”. 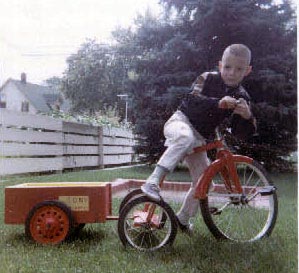 Anthony Towstego, with a new wagon hand built by Grandpa Alex! Who knew a music website was in the future!

In 1964, my toddler ears heard the sounds of four boys who would change pop music forever. The Ed Sullivan Show on that chilly February night had my big sister and brother glued to the TV. One note of guitar string, changed music for ever “Perwwannggg… It’s Been a Hard Day’s Night” was the start of it, followed by “Twist and Shout”. Even from the crib I was digging the tunes from the living room! 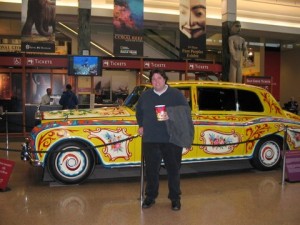 The music surrounding me, the Beatles, Janis Joplin, Jimi Hendrix, The Band, Joni Mitchell, to name a few, led me nicely into my teen years, thanks mostly to my hipster sister and her friends. My Dad was always away on business, and my mother being very liberal in her attitude about us kids hanging out, (we had the house everyone else came to visit and hangout at), let us play the now, more sophisticated turn table sound system, with a four speaker capability, right smack in the middle of the living room. There, the sweet voice of Linda Ronstadt would hypnotize my brother and I. The haunting sounds of Fleetwood Mac harmonies could make you feel like you were drumming with them while “Tusk” would roar through your senses.

My best buddy Kevin and I played side A of “The Dark Side Of The Moon” a thousand times. Our other buddy Finn played drums in a band, who we would watch rehearse in an old warehouse. In later years Finn went on to be the tour manager for the Barenaked Ladies. 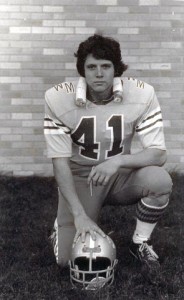 Anthony Towstego 1978, his football career eluded him, but he got to meet the cheerleaders and enjoy sweet music along the way…..!

In my house, every piece of music available was played to the tenth degree….the soundtrack album to Woodstock (by us kids), to the Sound of Music (by Mom and Dad).

My best friend Kevin was tragically killed in a car accident, after having just dropping me off in front of my house. He had just turned down his eight track for a brief moment, causing the voice of “Ziggy”, to grow quiet for just a second, as Bowie, even in 1976 was becoming masterful and Kevin’s favourite musician. “Nite my friend..see you tomorrow”……… To this very day, I hear David Bowie as ziggy and I tear up. At his funeral a young man sang a song by The Hollies, “He’s Ain’t Heavy, He’s My Brother”…. Kevin felt like a brother, our shared love of music kept our friendship special, all those years.

Then there was our boarder, Murray who lived in my basement the year before, who tragically drowned. His music tastes brought our attention to Deep Purple, Steppenwolf and my very first concert, April Wine, in 1974.

Kevin and I used to sneak in (we were both slightly under age) together to a little Park Town bar and listen to the folk singer my sister was dating, Mike Meldrum, he was with a folk band called Nosey Parker. The hippies would glide in and out the Park Town club, grooving to the enchanted lyrical tunes of America, Jim Croce, Neil Young and my personal favourite James Taylor. It all was harmonized ever so beautifully…

As my albums continued to play my life soundtrack, the music and lyrics of James Taylor would become my soul music so to speak. For some strange reason, I sound amazing when I sing his music out loud alone in my car with the windows rolled up. But, wow, does his music speak to me. Every word, every lyric, touches my heart and fills my soul with a feeling of euphoric joy.

I could not stop myself in 1992 from attending a James Taylor concert in the state of Washington. My sister had cleverly bought me the ticket. The 2000 km drive was more than worth it. The best part was I got to meet the man himself! He posed on the edge of the stage during warm up, for me. I told him I was from Saskatoon, Canada. He declared with a smile, “Well, that’s Joni’s town!” He was right, Joni Mitchell, who had made an impeccable mark in modern music, had resided in Saskatoon, while growing up.

By 2002, and now a television and film producer, it seemed logical to me, that not only the music, but the stories behind the songs, the performers and the inspiration behind the music was all very special. I was compelled to found the Entertainment West television series. A program that was intellectual, intelligent, and informative and brought out in depth discussions with the men and woman, who would play a part in the soundtrack to all our lives. For four years we documented many of the worlds most renowned artists in interview and performance, including some Canadian performers, like k-os, Tom Cochrane and Jim Cuddy. We even interviewed an especially young 50 Cent! So many greats and so many up and comers like Tegan and Sara and Serena Ryder.

Now, a decade later, the Ewest Music Vintage Vault is soon becoming available to the world, for free, through the advent of Youtube and their sponsors. Music and interviews that have not been heard or seen outside of Canada. In May of 2014 our pre-launch of the Ewest Music website, and in August of 2014 we anticipate continuing the story with the full launch of the website, now soon touching people worldwide. Correspondents from many countries are now gathering the stories and helping to make sense of the soundtracks to all our lives. I am proud to help bring that to people, through the very special invention, called the internet. With the passion of our correspondents and support of our co-sponsors, it’s happening beyond all expectation.

In 2012, I had to honour my mom’s singing in some special way, and as she laid nearly comatose in palliative care, my sister and I agreed it was time to fill her soul with sweet music, her eyes were closed, but I knew she could hear plainly, as the two lovely guitar players sang so softly “You are my sunshine…my only sunshine” 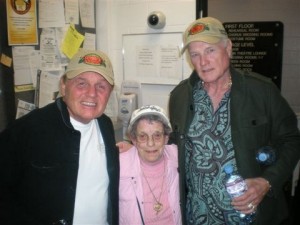 Marjorie Towstego (RIP) backstage at the Beach Boys concert with original Beach Boys, Bruce Johnson and Mike Love.  They were great guys to take the time to meet with the former ewest secretary!

In memory of my mother Marjorie.

We hope all of you viewers make the music and interviews of Entertainment West, The soundtrack to your life.

CEO and President, Thomega Entertainment Inc., Entertainment West, Anthony's career has spanned four decades. As a producer of feature films, dramatic television series and documentaries, all of which have been nationally and internationally distributed, he is best known for his dedication to producing historical stories of compelling human interest and compassion. Anthony’s efforts have been recognized through many awards and accolades throughout the years. As a past producer with the Canadian Broadcasting Corporation, and then independently producing, his work continues to grow and enrich audiences throughout the world, especially as he embarks on a digital media platform enterprise, soon to be a well established brand on the internet in all corners of the globe, ewestmusic.com and ewesttv.com

A Peek into the Banff World Me…

jacksoul: A World of Love in T…